From Student to Mentor: Estrella Mountain Lab Student Becomes an Instructor in the Same Classroom

From Student to Mentor: Estrella Mountain Lab Student Becomes an Instructor in the Same Classroom

We recently had the opportunity to sit down with Professor Tracy Baker, Computer Information Systems Residential Faculty at Estrella Mountain Community College (EMCC). In this interview, he discusses how his career path lead him to go back to school at EMCC for multiple degrees, certifications and then eventually to teach in the same classrooms where he once was a student.

NDG: Can you start by describing what you do?

Tracy: I work at EMCC in the Computer Information Systems division, where I teach all of the Red Hat Academy’s Linux classes as well as some Cisco classes.

NDG: Tell us about your past jobs and career?  What did you do before you started this job?

Tracy: I began my IT career in 1978, in high school, where I began to learn programming languages on the IBM 360 mainframe and Apple II desktop computers. I attended junior college for a short time, where I studied computer science, before needing to leave due to financial difficulties. I decided to join the Navy and eventually became an Electronic Technician working on computer-controlled RADAR systems.

When I left the Navy in 1988, the personal computer market was just beginning to really take off. It was like the Wild West with little mom ‘n’ pop shops everywhere. It didn’t matter that you didn’t have a formal education in computer science; if you were able to do the work, it was easy to get a job. Between the early 90s through 2009 my career was on a continual upward trajectory. I had many wonderful jobs in many different capacities. In late 2008, the market crashed. In 2009, I was laid-off. It became very difficult for me to get a job. There were too many people out there, like me, looking for a job. It didn’t matter that I had almost 20 years of experience; without a formal education or professional certifications, I couldn’t even get an interview.

My wife and I had a vacation home in Phoenix, Arizona.  In the fall of 2011, we decided to move from California to Phoenix because the cost of living was much lower. In Phoenix, I found the job market was still very tight. There was little opportunity for people without a degree or certifications. I decided to go back to school. 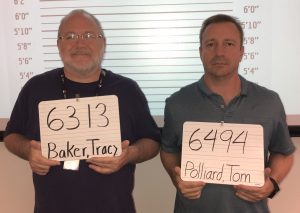 In the spring of 2012, I went to the EMCC campus and opened a course catalog.  I saw a course for Cisco, so I registered to take it at their Cisco Networking Academy. My first instructor was Adjunct Professor Tom Polliard, who did a great job.  I really enjoyed his class, so I went back for the second class in the sequence.  I was studying many things I already knew while being introduced to new topics. That summer, I went to South Mountain Community College (SMCC) to finish the Cisco Certified Network Associate (CCNA) courses.  While there I would build my own Packet Tracer exercises from scratch.  I would send them to Tom just to stay in touch and communicate.

In fall 2012, Tom transferred to SMCC as a full Professor. He must have enjoyed my work because when he needed someone to help teach some classes, I was the one he asked for help.  In the spring of 2013, I began teaching Cisco CCNA classes to beginning learners at SMCC while still a student at EMCC.  At this time, I began taking Linux at their Red Hat Academy where I met my mentor Randy Larson. He encouraged me to become proficient in Linux.

I graduated EMCC in the spring of 2013 with a degree in Linux Networking Administration and another in Cisco Networking Technology. In the fall of 2013, I joined SMCC as an Adjunct Professor and Systems Administrator.

Along the way, in addition to the CCENT and CCNA certifications, I also earned the Cisco Certified Network Associate – Security, CompTIA A+, CompTIA Linux+, NSA CNSS 4011 and the Red Hat Certified System Administrator.

In January 2016, I was hired at EMCC as a full Professor in the Computer Information Systems division. I replaced my mentor, Randy, who retired. I teach, and lead, all of the Red Hat Academy’s Linux classes as well as some Cisco classes.

NDG:  What motivated you to teach IT?  Why teach technology?

Tracy: While I was working, studying and earning a new degree, my college got a TAACCCT grant.  Given my background, new credentials and new knowledge, the college hired me to be a tutor to new learners. Tom, Randy, and Mike Jones were instructors that were helping me and others.  I saw that they truly cared about their students. You could see they cared in the way they taught. Watching my mentors work made me want to teach. 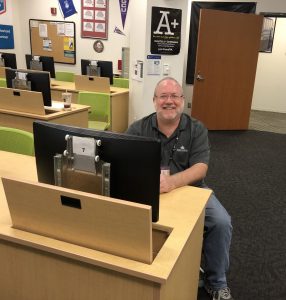 NDG: How would you say that working with NETLAB+ benefits the courses that you teach?

Tracy: While I was in school I took the CCNA Security course.  I used NETLAB+ to practice the labs.  The lab work on NETLAB+ helped me to pass the CCNA Security. I also used NETLAB+ when I took the VMware IT Academy vSphere Install Configure management course at Estrella Mountain.  This course gave me the skills I needed to be a VMware system administrator, which I was then hired to do at South Mountain Community College.

More recently, NETLAB+ allowed me to customize EMCC’s Red Hat Academy labs. I was awarded the Director’s Award for the work I did in converting commercial training labs into those more suitable for the academic environment. None of that could have been done without NETLAB+.

NDG: Can you share with us what you tell your learners?  How do you motivate learners?

Tracy: I went from being a student to a Professor in just three years. I’m not that far removed from what they’re experiencing. I tell them that I know exactly what they are going through because I did what they’re doing; I sat where they’re sitting; I took the same classes they’re taking from the same instructors. If I could do it, so can they! When I am teaching a class, I always want to achieve three things:  Teach the material, try to instill a sense of community amongst the students, and help them develop good work habits.

Tracy: Earning certifications is very important, they help people get, and keep jobs. I should know with all the certifications I have! Some of the most valuable ones are the Red Hat certifications because they’re 100% practical. There are no true/false, multiple choice or essay questions. You must demonstrate that you can actually do the work in a pressure situation. Employers are looking for that type of skill set. Cybersecurity certifications are also in incredible demand.

NDG: How would you describe the impact that learning Linux has had on your life and career?

Tracy: I was encouraged to become proficient in Linux from my mentor while I was still a student. Learning Linux really helps a person understand what’s going on “behind the GUI,” as we teach the course almost exclusively at the command line. Now I teach Linux to my students every semester through the Red Hat Academy Linux courses.

NDG: What would you tell other instructors about our work, the academic programs we support?

Tracy: NETLAB+ provides a great tool to create a custom lab environment to fit your program’s needs. I’ve used it to learn about Cisco security and VMware. I use it to teach Red Hat. Other instructors at our college use it to teach cybersecurity and other classes.

NDG: What do you want people to know about your college and the learners you serve?

Tracy: I begin each day by asking myself one question: Am I doing what’s best for my students? If I am not, then I need to change what I’m doing.

As an open access college we serve and reflect, our community. Our students are from all walks of life. This presents us with a number of challenges, which I believe we are very good at overcoming. I teach occupational education. This means that my primary focus is to help learners get a job in the IT field. To those ends, we must not only teach the material, but we must prepare them for the job market; we help them build their “human networks;” we introduce them to employers; we help them with their soft skills such as resume writing and interviewing.

My wife jokes that I’m training students to “take my job” (the job I used to do). Of course I am! If I’m not doing that, then I’m not correctly doing my current job as a teacher and mentor.

Are we successful? Perhaps a couple of quotes from former students answer that question:

“I’ve got to say, the best talent we’ve received so far has been from Estrella; you guys are blowing [other schools] out of the water so far.”

“Hi! I just landed a Systems Engineering position with a company in downtown Seattle. I wanted to thank you again as I still attribute a large part of my success and love of tech to my Cisco courses and your guidance…”