Technologies Are Converging in Linux 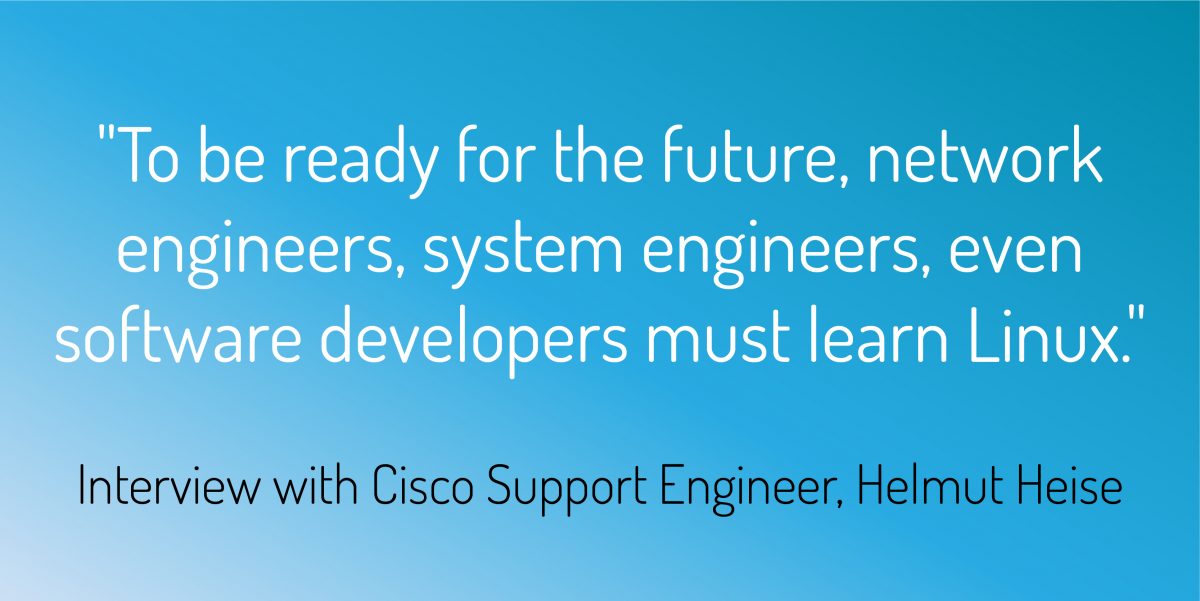 Technologies Are Converging in Linux

We recently had the opportunity to sit down with Helmut Heise, a Customer Support Engineer at Cisco, to discuss the future of Linux in networking and other applications. Read the interview to learn why Helmut believes Linux is an essential skill for any engineer interested in a career in networking, programming, or software development.

Interviewer: Thank you, Helmut, for joining us today. We’re excited to get your insights into the evolving role of Linux in networking and other applications. Can you start by describing what you do at Cisco?

Helmut: I’m a Customer Support Engineer dedicated to helping customers solve problems with wireless technology. I spend most of my time, like other TAC (Technical Assistance Center) engineers, troubleshooting problems. Specifically, wireless issues. As part of this job, we need to recreate customer issues in the lab to test solutions before implementing them in a production environment.

Regarding the Linux side, I would say that we use Linux about 70% of the time. For example, when we have to recreate customer issues in our labs, we need to interface with DHCP servers, DNS servers, and some services hosted in Linux. In fact, many of Cisco’s products are based in Linux. On the wireless side, for example, we have wireless controllers and wireless access points in which the main operating system is Linux. We have security platforms that are hosted on Linux servers as well.

Interviewer: Got it. So Linux is definitely a huge part of your job. Why did you choose to learn Linux?

Helmut: I started learning Linux in university. One motivation was just opposition. When I was in university, I liked doing things differently. Not just the Windows way. That’s why I first started to use Linux.

I felt that the Linux approach was consistent with my own thinking. Linux is free. There’s a large community available to support problems. And you don’t have to pay any money to resolve issues. I like that way of thinking. It was really a personal decision.

At this point of my career, networking is not just about networking. Now network engineers need to know Linux. My SQL databases and other platforms are hosted in Linux. I believe that the future of engineers is not just networking, or programming, or software development. You also need to know how to make things with Linux. There’s a strong future for Linux in the IT sector.

Interviewer: That’s exciting. Do you think there are any other industries, besides IT, that could benefit from knowing Linux?

Helmut: Sure. We know that Cisco products and Linux are present in airports, where they’re used to manage air traffic. They’re present in healthcare and other industries. Not just IT. A lot of industries are adopting Linux because all the drivers and code are easy to deploy.

Interviewer: Has knowing Linux opened any doors for you in your career?

Helmut: Yes. At a previous company, I had the opportunity to deploy a Linux box in the a telephony server in the Amazon cloud, hosted in a Linux server. That deployment helped open the doors for me here at Cisco. Actually, I’d like to thank Linus Torvalds and the Linux community for making that possible.

Interviewer: What Linux knowledge would you recommend to future IT professionals?

Helmut: I started with Debian. It’s easy to understand, and has a large community. Most of the problems you encounter, you’ll readily find solutions on the Internet. My advice is to start doing things in Linux that you’d do in Windows or on a Windows server. This is best way to learn. You could, for example, set up an image server to send fake email (as a joke). Have fun with it, and learn along the way.

Interviewer: Any final thoughts on Linux?
Helmut: I believe a lot of technologies are going to converge in Linux. You can see it at Cisco. Many of our platforms are adopting Linux.

“To be ready for the future, network engineers, system engineers, even software developers must learn Linux.”